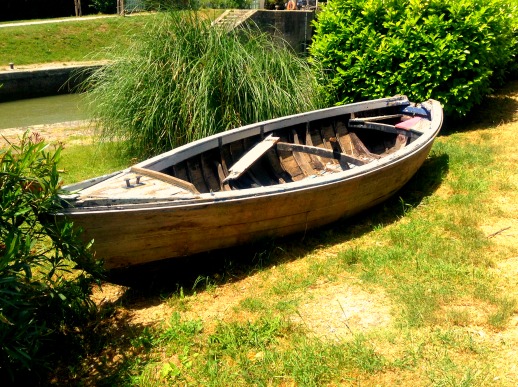 After a fantastic first couple of weeks in France we headed further South East for the small town of Le Somail. It was here that we would board our new mode of transport and accommodation for the next week as we travelled up the Canal Du Midi.

Our home on the water, rented from Nicole’s, was well equipped with two bedrooms, bikes, BBQ, lawn chairs, fully stocked kitchen and of course, a complimentary bottle of wine.

Testing out the equipment

Now it was just us and the Canal for the next 7 days and 116 km to Port Lauragais.

Along the way we saw many beautiful towns,

including the famous fortified town of Carcassonne which dates back to the Roman Empire (3rd and 4th centuries),

and stunning vistas of Frances countryside.

We also saw a few animals on route. Lydia and Callum loved feeding the birds from the boat as we made our way along the Canal.

While enjoying all the beautiful scenery, we also had to get through 61 locks. The original purpose of the Canal was to link the Mediterranean Sea with the Atlantic Ocean. A huge vision and undertaking, especially for the times. After some intense planning and construction the Canal was filled with water and officially opened for transport in 1681. Since it’s opening, amazingly, the Canal has operated uninterrupted for more than 3 centuries.

Once we arrived at the lock stations, we would pull over so I could jump off the boat and then meet the family inside the lock.

Here’s the family bringing the boat into the lock. Once inside, Paul and Callum would toss me the bow and stern lines to ensure the boat was safely secured while the water rushed in. In this lock we were alone, but a lock station can hold up to 4 boats and depending on who was travelling with you, these stations could be quite entertaining. Lets just say they have good reason to put fenders all around the boats. We told Nicole’s that Paul worked for the “Canadian” Coast Guard so they gave us a couple extra precautionary fenders. Joking of course…in reality, Paul did a stand up job navigating the canal and the locks.

The majority of the locks we went through had a lock keep that controlled the gates, a station house and sometimes a little shop to buy local wine. We never wanted for wine that’s for sure.

Some of the lock Keeps added a bit of personal flair to their stations.

We also met some furry friends while we waited for the locks to fill so we could carry on upstream.

Everyone got an opportunity to man the wheel and Lydia even brought the boat into one of the locks.

Callum’s big request was to have one really fancy dinner while we were in France and it was here that he decided to try Lamb for the first time. Shocking to me, it was a hit!

And with that, I leave you with my favorite picture of Paul from our travels so far. A bike, a basket, a baguette and a bottle of wine. Living the dream Paul…living the dream.

We have now left France and are staying with a friend in the Beautiful country of Andorra.